Here is another issue in avast!, in the GUI AvastUI.exe. It allowed arbitrary code execution within the context of that trusted process, and as such EoP, self-protection bypass, etc. Exploit is provided. It was fixed about a year ago by the avast! crew.

It's been a while since I had used a shatter attack for an interesting purpose! Trendy about 10 years ago (according to Wikipedia), they allowed privilege escalation thanks to core components of Windows like with MS02-071. They are mostly extinct due to Windows now restricting the messages sent to more privileged processes, or isolation of services in session 0. An old but very good presentation of the excellent Brett Moore explains them in detail.

But the problem resurfaces when a process attempts to introduce home-made integrity levels, while functioning as the current logged in user (and at the same IL). This new security boundary can be shattered thanks to Windows messages.

Since we are running in the same context as AvastUI.exe, we can pretty much send any window message to its windows. This appears to be something that the developers didn't think about. For example, the window corresponding to the window class asw_av_tray_icon_wndclass accepts quite a bit of user messages. The following piece of code handles the message 0x83fd:

As you can see, this handler will interpret wParam as a function pointer and lParam as its first and only argument and call it. This obviously becomes an issue when the message is sent by a 3rd party application as it pretty much guarantees code execution within the AvastUI.exe process.

This call primitive is ideal to execute a function like LoadLibrary. We have to make the first parameter point to a string locating the DLL on the drive. Given that we are local, and that Windows doesn't do per-process randomization of DLLs, we already know the address of LoadLibraryA.

But one has to be a bit imaginative to know how to place the string into the AvastUI.exe process memory at a known location. One of the solutions that I found (that restricts the path to the DLL to *44* bytes), is to use a functionality that would put memory under our control at a known offset into
the .data section of AvastUI.exe. This requires some interaction with the named pipe \\.\pipe\snx_sdesktop_pipe. The process AvastUI.exe creates 10 of those, and reads from them in the following code:

What I called g_NamedPipeStructures is located in the .data section of AvastUI.exe and is an array of 10 structures containing the handle to the pipes followed by a 44 byte array receiving the information read from the pipe.

In order to know where this structure is located in AvastUI.exe, we load the binary within our process and locate the structure thanks to a code signature. If there is no address space collision that would trigger a remapping elsewhere, that address will be the same in the remote process. We then open the 10 named pipes and write the DLL path to them to make sure all the structures will be filled with our data. Then we locate the window, and send it the window message with LoadLibraryA as wParam and the 1st structure address as lParam. This will load the DLL within the AvastUI.exe process. 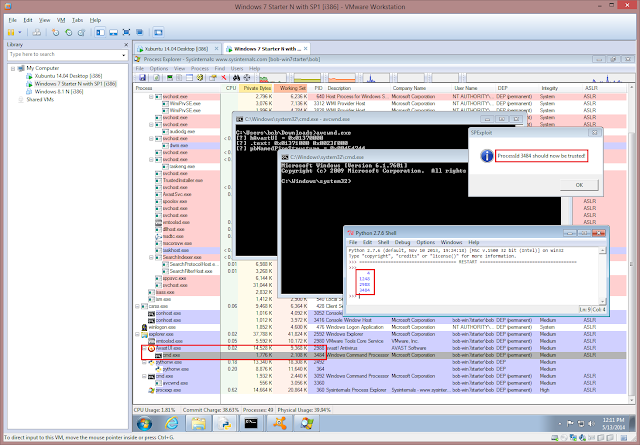 In my exploit, the DLL in question will spawn a cmd.exe and call the IOCTL to make it trusted. Obviously raising a cmd.exe to trusted doesn't make much sense in a real world exploitation scenario, this is just more of a visual example.