Skype does away with random supernodes

A major change in the Skype network architecture has occurred two or three weeks ago (at the time I wrote this), and has gone unnoticed as far as I know. The number of supernodes has dropped from 48k+ to 10k+, and all the supernodes are now hosted by Microsoft/Skype. Promotion of random eligible nodes to supernodes has stopped (through the setting of the global boolean 33h).

Ironically, those remaining supernodes run on grsec'ed Linux boxes (I hope Spender gets a sizeable donation from Microsoft). They can host a considerable amount of clients, ~100000.

At the same time, the number of online Skype users jumped (http://skypejournal.com/blog/2012/04/23/skype-topped-41-5-million-concurrent-users-online-today-chart/) and can now reach 41M at peak hours.

This will likely ensure that former outages (http://articles.latimes.com/2010/dec/23/business/la-fi-skype-20101223) don't happen again, and gives MS a better control over the network.


Edit: dead link, so here is the original graph from Skype Journal: 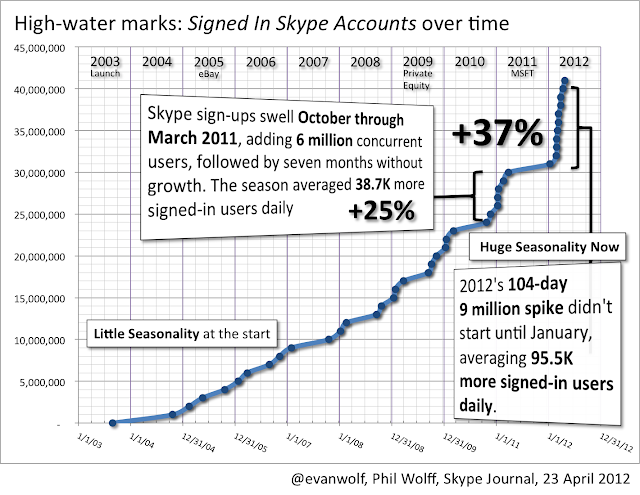 
As part of our ongoing commitment to continually improve the Skype user experience, we developed supernodes which can be located on dedicated servers within secure datacentres. This has not changed the underlying nature of Skype’s peer-to-peer (P2P) architecture, in which supernodes simply allow users to find one another (calls do not pass through supernodes). We believe this approach has immediate performance, scalability and availability benefits for the hundreds of millions of users that make up the Skype community.

I do think that this was the way to do things, and that their beliefs expressed in the last sentence are correct (if anyone cares what I think!). They didn't say how much they are going to give Spender though...

>> Ironically, those remaining supernodes run on grsec'ed Linux boxes (I hope Spender gets a sizeable donation from Microsoft). They can host a considerable amount of clients, ~100000.

How do you know this?

a curiosity, how did you determine that the nodes run grsecurity? what techniques did you use to discover it?